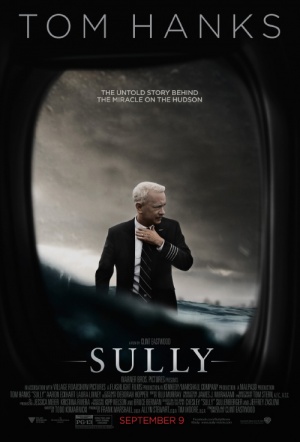 Clint Eastwood directs Tom Hanks in the role of Chelsey Sullenberger, the "Miracle on the Hudson" pilot who saved lives with an incredible crash landing only to be criticised for his actions.

On January 15, 2009, the world witnessed Captain 'Sully' Sullenberger glide his disabled plane onto the frigid waters of the Hudson River, saving the lives of all 155 aboard. However, even as Sully was being heralded by the public and the media for his unprecedented feat of aviation skill, an investigation was unfolding that threatened to destroy his reputation and his career.

Tom Hanks, Hollywood’s favourite uncle, could not have been better cast for the role of Chesley “Sully” Sullenberger, the real-life pilot who made the call to crash-land a plane on the Hudson River with 155 lives on-board. He’s a straightforward and likeable man – the type that Uncle Hanks plays best – confronted with a horrifying life-or-death scenario that demands extraordinary things from ordinary people. It may come as a surprise, then, that Clint Eastwood’s film starts immediately after everyone is saved.

If there’s one Hollywood star you would trust to crash-land a commercial airliner without injuring a soul on board, it would surely be Tom Hanks.

Even as recently as American Sniper, Eastwood has done a much better job than this of shading in the grays of what constitutes heroism, both during and after the fact. Sully is so square, it's a wonder it even gets airborne.

That it unnerves you as much as it does may seem surprising, given that going in, we know how this story ends. But Mr. Eastwood is also very good at his job, a talent that gives the movie its tension along with an autobiographical sheen.

An unabashed crowdpleaser about a hero fighting to maintain that title when corporate greed threatens to tarnish his image.

Clint Eastwood still has surprises in him.

It just might be the first plane-crash movie that suggests itself as suitable in-flight entertainment too.

Efficient and effective in Eastwood's experienced hands, "Sully" has interwoven a crisp and electric retelling of the story of the landing we know with a story we do not.

The fact that Clint Eastwood continues to turn out such strong, impassioned, relevant, and entertaining work in his twilight years is nothing less than staggering.