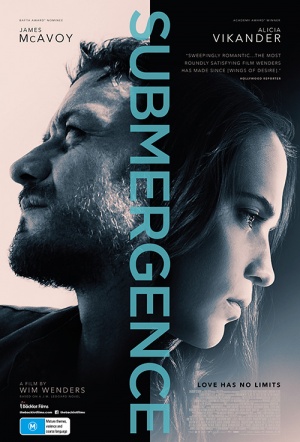 James McAvoy and Alicia Vikander are lovers separated by distance and circumstance in this Wim Wenders-helmed drama based on J. M. Ledgard's novel.

"The story begins with a deliriously wild love affair between two people near the resort town of Dieppe, on France's northern coast. They fall rapidly and unexpectedly into each other's arms, even though their jobs are destined to separate them. Neither is fully prepared for what will happen next. While Danny, fascinated with exploring the ocean's greatest depths, sets off on a perilous quest, James leaves for Somalia, where he is soon sucked into a geopolitical vortex that puts him in grave danger. Both characters are subject to different kinds of isolation as they pine for each other; their determination to reconnect becomes as much an existential journey as a love story." (Toronto International Film Festival)

Even two glamorous and well-matched stars of the moment can't do much to undermine the Wenders meander.

It's a love story, it's a spy thriller, it's an underwater adventure, it's about terrorism, it's about climate change, it's about being ghosted by text (!). But ultimately - sadly, predictably - it's also a bit of a mess.

Wim Wenders' latest is a handsome production which, although it is rich with symbolism, is ultimately not quite as satisfying as it should be.

Despite the potent raw material at his disposal, Wenders listlessly flips back and forth between the two backdrops, allowing any remaining element of dramatic tension to slowly seep out along the way.

The most roundly satisfying fiction feature Wenders has made since, well, that first one about the angel so in love he gives up immortality.

A quiet meditation on how love can be an oasis in a cruel and violent world, Submergence is a strong work from a bona fide cinematic master.