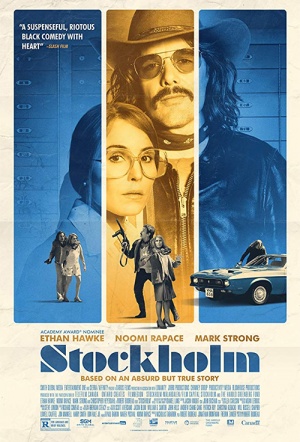 Ethan Hawke takes Noomi Rapace hostage during a bank heist in this crime dramedy based on the events of the 1973 hostage crisis in Stockholm.

"Hawke stars as Lars, a charming, bumbling, Bob Dylan-loving crook who storms into the Swedish capital’s mightiest money lender and confuses hostages and police alike with his bizarre demands — like requesting an accomplice and friend (Mark Strong) be released from prison to join him in his delinquency. As the hostages come to realise that Lars couldn’t hurt a fly, bank clerk Bianca (Rapace) and her fellow captives help him hatch a plan to prolong the standoff and escape with millions. " (Tribeca Film Festival)

Suggests "Dog Day Afternoon" made by a filmmaker who can't decide whether he's pitching a docudrama or a sitcom.

Age becomes Ethan Hawke. The more raspy and wrinkled he gets, the better he is on screen... And here he holds together a film that is shaky in many respects and shouldn't work.

Drowsy in feel and muted in colour, "Stockholm" is lightly amusing and watchable - mostly thanks to Hawke - but never makes the case that this is a story that needed to be told, with or without laughs.

An absurd or rather absurdist true-crime melodrama.

Stockholm...is far from the first movie to believably show a crime victim coming to sympathise with a criminal. But it's a funny and agile one...