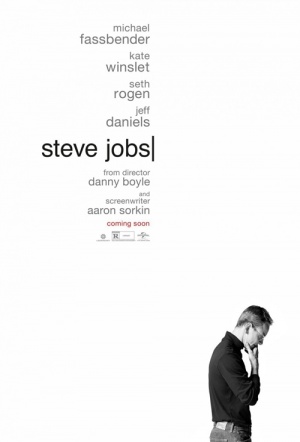 Danny Boyle (Slumdog Millionaire) and screenwriter Aaron Sorkin (The Social Network) open an unconventional window into the life of Steve Jobs. Michael Fassbender is the Apple genius, Seth Rogen is co-founder Steve Wozniak and Kate Winslet is Jobs' long-suffering assistant Joanna Hoffman. Based on the biography by Walter Isaacson.

The film is divided into three different eras, each depicting a key Apple product launch and the multiple conflicts Jobs succumbed to from family and colleagues. 1984 sees a voice demo of the Apple Macintosh, but a technical failure threatens to derail the entire showcase. 1988 sees the launch of the NeXT Computer, from the new company Jobs' founded. 1998 sees the launch of the iMac, a technological game-changer.

Even without its Ashton Kutcher-led predecessor, this Steve Jobs biopic would likely have suffered from the perception that there may be nothing left to say about the much-discussed Apple innovator. Thanks to the specific talent involved in the film, it does not live down to this perception at all.

An enthralling performance by Michael Fassbender fuels this brilliant, infuriating and richly unconventional take on the life of an American visionary.

This is a movie that never lets up or allows viewers to do anything but meet it with fearsome focus. Much like its subject.

Sorkin outdoes his work on The Social Network with an even sharper and more savage script.

It is a formally audacious, intellectually energized entertainment, a powerful challenge to the lazy conventions of Hollywood storytelling and a feast for connoisseurs of contemporary screen acting.

There's undeniable craftsmanship here, especially in Fassbender's confident and transformative performance, but Sorkin's script fails to shout and quip its way to anything approaching dramatic vibrancy.

A smart, hugely entertaining film that all but bristles with crackling creative energy.

Racing in high gear from start to finish, Danny Boyle's electric direction temperamentally complements Sorkin's highly theatrical three-act study, which might one day be fascinating to experience in a staged setting.

For all its relevance and grandeur, Steve Jobs is ridiculously entertaining. You might say, user-friendly.