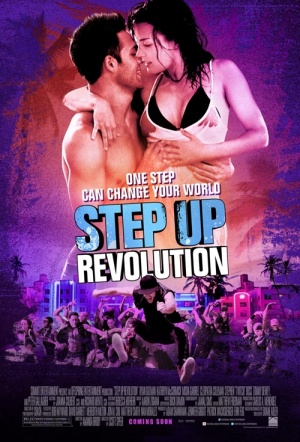 The fourth movement in the Step Up franchise starring Kathryn McCormick, the lively competitor from TV’s So You Think You Can Dance.

Emily (McCormick), the daughter of a wealthy businessman, arrives in Miami with aspirations of becoming a professional dancer and soon falls for Sean (newcomer Ryan Guzman), leader of a cutting-edge, flash mob dance crew. The crew, called the MOB, are striving to win a contest and some serious cash. But when Emily’s father threatens to develop the MOB’s historic neighborhood and displace thousands of people, the team turn their performances into protest mobs, risking their dreams to fight for a greater cause.

Also released under the title Step Up Revolution.

2012Rating: PG, for some suggestive dancing and language99 minsUSA
DramaRomance

Alas, the dancers have to stop sometimes to allow the utterly unoriginal story to be told, and the romance at the center of it inspired Amanda Brody, the screenwriter, to produce dialogue so cheesy as to be laughable.

OK, OK. They're good dancers, and well-choreographed. You can see the movie for that and be charitable about the moronic plot.

Anyway. Here's what matters: The dance scenes are great. While no more revolutionary than the "political" plotline, the flash-mob concept does allow for more creative choreography than this series has seen in some time.

More is not necessarily better, even when it comes to hot bodies and smooth dance moves.