Stations of the Cross 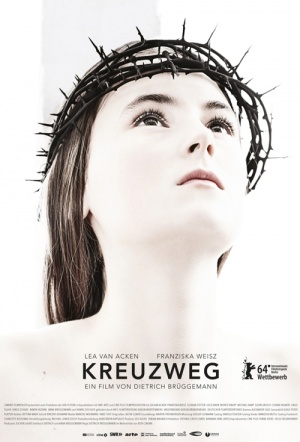 German film that premiered at the 64th Berlin International Film Festival, winning a Silver Bear for Best Script, following a 14-year-old girl who fights to live up to the high expectations of her Catholic priest and family.

"Maria finds herself caught between two worlds. At school this 14-year-old girl has all the typical teenage interests, but when she’s at home with her family she follows the teachings of the Society of St. Pius XII and their traditionalist interpretation of Catholicism. Everything that Maria thinks and does must be examined before God. And since the Lord is a strict shepherd, she lives in constant fear of committing some misconduct.

"Whilst Maria’s mother takes a tough line in compelling her daughter to stay on the path of righteousness, her father is often reticent and stands back during critical moments. Conflicts intensify as arguments erupt with teachers and doctors. Desperate to please everyone, Maria soon finds herself trapped in the crossfire." (Berlin International Film Festival)