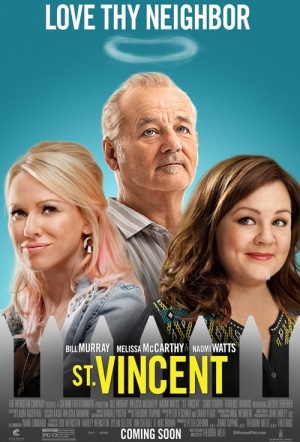 Bill Murray is the titular Vincent in this odd-couple comedy-drama. The bawdy war veteran grouch befriends a sweet kid struggling with his parents' divorce. Co-stars Melissa McCarthy as the boy's mother, Chris O'Dowd as a monk, and Naomi Watts as a pregnant Russian prostitute.

Delivering laughs, pathos, and easy-going charm, St. Vincent is a good example of a film that doesn't aim to break new ground, but exceeds at being broadly entertaining.

With St. Vincent, the chief pleasure is comedy, which typically arises from waiting to discover what Bill Murray might do next.

St. Vincent has nothing on Rushmore, an obvious forebearer, even though it strains for the same egalitarian spirit of thrown-together family...

A big, sloppy wet kiss of a movie.

There is a contrivance to both story and script that grates, rubs up against Murray’s appeal as a loose cannon.

St. Vincent is even sappier and more committed to yanking heartstrings and manipulating emotions than Hyde Park On Hudson or The Monuments Men, and ultimately even more precious and treacly.

Will dodge your impulse to projectile vomit. For that, all hail Bill Murray who whacks away at the script's sentimental softballs like A-Rod in full swing.

Amusing enough... but ultimately reveals its true self as a film equivalent of the gooey 1971 Ray Stevens song "Everything Is Beautiful."

Murray's finest, funniest, meatiest performance since Lost In Translation - just a shame it's contained in such a lightweight dramedy.