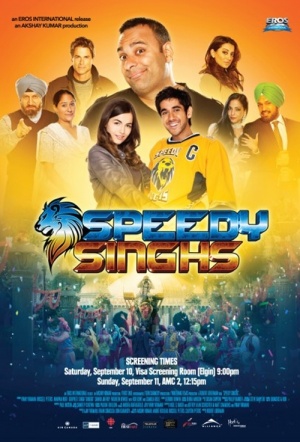 Sports comedy about a Sikh ice hockey player in Toronto, Canada, stuck between his Indo-Canadian family's expectations and his dreams of hockey glory.

Rajveer (newcomer Vinay Virmani) defies his father's wish to devote his life to religion and the family business and starts to take hockey seriously. But unable to find a foothold in white man's game, he forms a ragtag, all Indian hockey team (the Speedy Singhs), finds a coach (Rob Lowe, Wayne's World) and brings in Uncle Sammy’s trucking company as sponsor - all behind his dad's back.

There are no surprises here, with father-son crisis and reconciliation, scaled-down quasi-Bollywood production numbers and the climactic big game all arriving on cue.