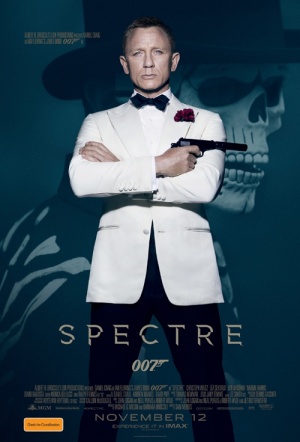 Returning to London after an off-the-books escapade in Mexico, Bond finds the UK's intelligence services in a shakeup. As a new bureaucrat (Sherlock's Andrew Scott) makes a power grab based on a global surveillance network, 007 gets back to his personal mission to find out more about the mysterious SPECTRE. Teaming up with the daughter of one of his previous victims, Bond's journey will take him to far-flung locations and back into his past once again, as the events of the previous Daniel Craig films take on a new dimension.

Within minutes, latest 007 outing Spectre had put a grin on my face, thanks to an energetic, aerially acrobatic opening sequence in Mexico City. Few would expect that facial expression to remain for all 148 minutes of Spectre’s overlong running time, and that turned out to be exactly the case.

A wealth of iconography - both incidental and integral - from the series' founding chapters is revived here, making [it] a particular treat for 007 nerds, and a businesslike blast for everyone else.

A rock-solid Bond flick that would have been hailed an immediate winner if it weren't for the fact that it has to shudder and shake in the darkness of the enormous shadow cast by its predecessor.

An unbalanced but never less than entertaining film...

This fourth outing for Daniel Craig as James Bond is achingly cool, as sleek and powerful as the silver Aston Martin DB10 that races through the movie.

In many ways Spectre is the purest Bond experience of the Craig era.

As an action movie, Spectre is every bit the equal of its predecessor, Skyfall. For at least half its running time, this is as good as Bond gets -- a rip-roaring and very stylishly made thriller with tremendous production values.

Even if this is less satisfying overall than Skyfall, there are sequences that rank with Bond's best.