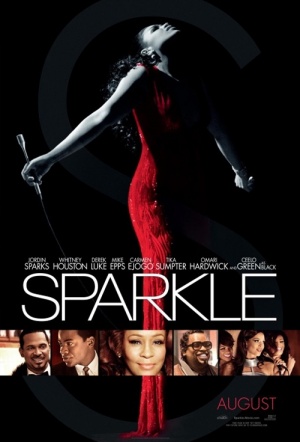 Starring the late Whitney Houston, in her last film, and 2007 American Idol winner Jordin Sparks, this showbiz saga follows a trio of aspiring Motown-era singing sisters. Inspired by the career of The Supremes.

Set in '60s Detroit, musical prodigy Sparkle (Sparks) and her two sisters (Carmen Ejogo, Tika Sumpter) graduate from the church choir to neighbourhood jazz joints, to national fame. But the price of success is high as Sparkle struggles to balance her new life, the allure of drugs, family dramas with her single-mother (Houston) and romance with music manager Stix (Derek Luke).

Producer Howard Rosenman said after Houston's passing in February 2011: "This would have been a big, big comeback, she is so brilliant in it. I was just raving about her performance, she was so great in it." Sparkle is a remake of Sam O'Steen's 1976 film of the same name.