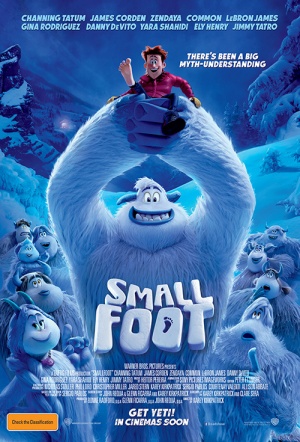 Channing Tatum leads an all-star cast featuring Zendaya (Spider-Man: Homecoming), Gina Rodriguez (TV's Jane the Virgin), talk show host James Corden, and NBA star LeBron James in this animated family feature about a yeti who goes in search of the elusive creatures known as 'humans'. From the creators of The Lego Movie.

News of the existence of the "smallfoot" draws attention to a young yeti who claims the discovery, throwing the simple yeti community into an uproar over whether or not he's telling the truth. To settle the case once and for all, he journeys forth to find another one of these elusive creatures.

If "Smallfoot" proves anything, it's not the existence of yetis, but the need for a fresh approach to such lazy storytelling.

The movie, directed by Karey Kirkpatrick, has just enough wit and visual invention to get by.

[Smallfoot] offers plenty of opportunities for the kind of physical comedy for which the old Warners teams were renowned.

It's a playful inversion of the bigfoot legend, cautioning against unthinking compliance, championing curiosity and encouraging putting oneself in another's shoes (or feet).

Despite feeling pretty inconsequential throughout much of its running time, Smallfoot's hopeful finale is unexpectedly uplifting.

Carries sufficient charm and a bit of unexpected depth to justify its breezy existence.