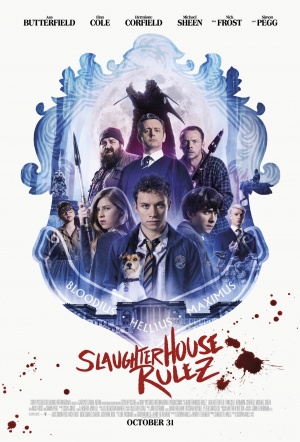 Unspeakable horrors begin to emerge from the ground at a British boarding school in this UK horror comedy starring Michael Sheen and Simon Pegg.

Don Wallace (Finn Cole, TV's Peaky Blinders), a student at the boarding school Slaughterhouse, faces the arcane rules of the establishment when a new threat emerges and the tenants of the school engage in a bloody battle for survival.

Slaughterhouse Rulez, for a horror-comedy, is neither particularly scary or especially funny. But it does have an amiable sort of charm.

For all the gung ho fx and severed limbs, this sloppy horror comedy under delivers on both shocks and laughs.