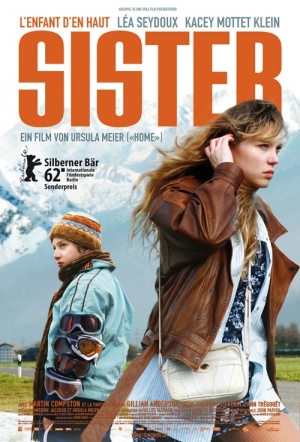 French coming-of-age dramedy, set in the Swiss mountains, about a poor boy who supports himself and his sister by pinching ski equipment from wealthy resort guests and selling it to the locals. Silver Bear winner at Berlin Film Festival 2012.

"A luxury ski resort in Switzerland. 12-year-old Simon lives in the industrial valley below, with his jobless sister, Louise (Léa Seydoux, Midnight in Paris). Every day, he takes the ski-lift to the opulent ski world above, stealing equipment from the rich tourists to resell to the local kids back down. As he partners with a crooked British seasonal worker, Simon loses his boundaries, which affects the relationship with his sister. Confronted with a truth they had both been escaping, Simon seeks refuge up above." (Berlin Film Festival 2012)

Far from a sociorealist morality tale about the lower class robbing those literally higher up, pic carves out its own unique niche by focusing squarely on the emotional needs of the 12-year-old protag and his titular sibling.

Like her 2008 debut Home, Swiss director Ursula Meier's accomplished follow-up focuses on those living on the margins.

Meier is clearly carving out a path all her own; the next one should be a gem.

A cool yet compassionate look at two people bound by love and shared struggles in a world of haves and have-nots.

An interesting and well-made movie, though with an uncertain ending.

A solid coming of age dramedy with strong social undertones.