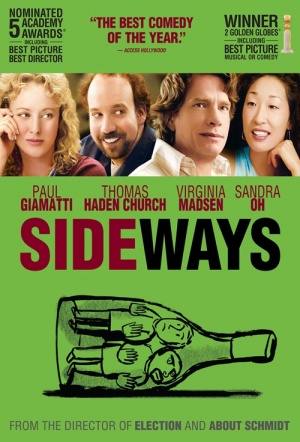 Filmmaker Alexander Payne's (Election, and later The Descendants) third film, a road-tripping comedy-drama with Paul Giamatti as Miles - a depressed, unpublished novelist - and Thomas Haden Church as Jack - a morally-dubious actor about to wed. The friends travel through Santa Barbara, touring its vineyards. Miles wants to relax, as he awaits word on if his latest novel will be picked up, while Jack wants a final sexual fling.

As well as winning Best Film (Musical or Comedy) at the Golden Globes, the screenplay (based on the novel by Rex Pickett) won multiple awards including the Oscar and BAFTA.