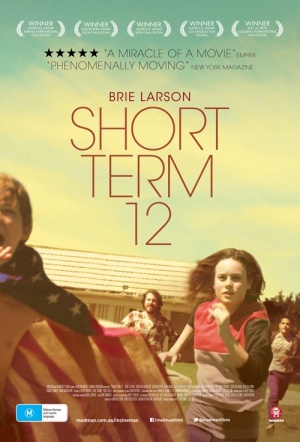 Indie drama with Brie Larson (Scott Pilgrim vs. the World) as Grace, a supervisor at a foster care facility attempting to balance work and a relationship with her co-worker boyfriend. Short Term 12, based on writer/director Destin Cretton's own short film, was a big winner at Locarno International Film Festival 2013, taking four gongs including Best Actress (Larson) and the Prize of the Ecumenical Jury.

"Passionate and tough, Grace is a formidable caretaker of the kids in her charge – and in love with her long-term boyfriend and co-worker, Mason (John Gallagher Jr). But Grace's own difficult past – and the surprising future that suddenly presents itself – throw her into unforeseen confusion, made all the sharper with the arrival of a new intake at the facility: a gifted but troubled teenage girl with whom Grace has a charged connection." (SXSW Festival)

This quietly wonderful exercise in glorious empathy more than lives up to the rapturous advance buzz it has been generating – it's one of the best American dramas in years. The worthy subject matter (foster care and child abuse) should make the film much harder work than it is. But it just breezes along with a ground level matter-of-factness that thankfully never spills over into gritty verité stereotypes. There's an 'American' quality to its social conscience that I cannot recall perceiving in any other recent film.

A film about scars, some physical, others emotional, but all examined with a sensitivity and understanding that cuts deep.

The lead character's called Grace, but don't be put off: Cretton's tough-love snapshot of shattered youth is achingly moving rather than manipulative or mawkish.

There's heart, soul and personality to burn ... But this is a film that, like many of its young characters, desperately needs to calm down.

Even as the gathering melodramatic storms threaten to swamp this pungent slice of life, Mr. Cretton manages to earn your tears honestly.

Affecting drama is a breakout for Brie Larson without losing its ensemble balance.

A miracle of a movie. Beautifully written and perfectly played, all of human life is here: the good, the bad, the messy and the uplifting.