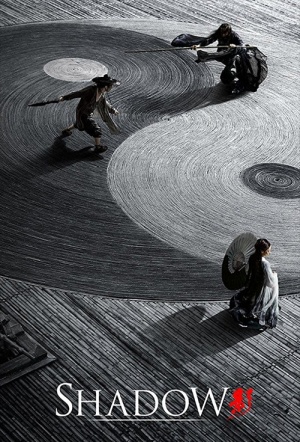 A king attempts to lead his people out of exile in this Chinese action drama from two-time BAFTA winner Yimou Zhang (House of Flying Daggers).

"The director’s reimagining of the classic Three Kingdoms – Jingzhou epic, this action-drama tells the story of a powerful king and his people who have been displaced from their homeland and long to win it back. The king is wild and ambitious, but his motives and methods are mysterious. His great general is a visionary who desires nothing more than to win the ultimate battle, but needs to lay his plans in secret. The women of the palace are tragic figures, caught between being revered as goddesses and treated as mere pawns. And then there is the commoner, the “everyman” around whom the inexorable forces of history swirl, always ready to swallow him up." (Venice Film Festival)

Every supremely controlled stylistic element of Zhang Yimou's breathtakingly beautiful "Shadow" is an echo of another, a motif repeated, a pattern recurring in a fractionally different way each time.

Zhang Yimou's Shadow is like a Chinese ink painting masterfully come to life.

A visually ravishing tale of intrigue and deception that stands proudly alongside [Zhang's] past triumphs Hero and House of Flying Daggers.

With action scenes choreographed with Zhang's typical verve and imagination - you'll never again think of your umbrella as just a tool for keeping the rain off - fans of this artistic end of the 'wu xia' genre ought to be delighted.

This is probably the most stunningly beautiful Zhang has made to date.