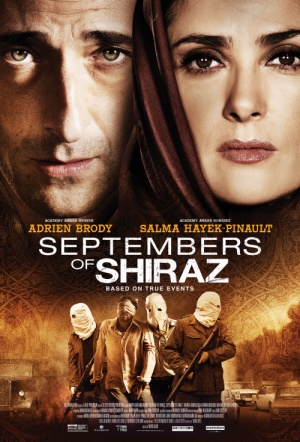 Salma Hayek and Adrien Brody lead this thriller based on true events, following a Jewish family caught in the 1979 Islamic revolution in Iran. Based on the autobiographical novel by by Iranian American author Dalia Sofer, from the director of The Sapphires.

"Someone must have slandered Tehran jeweller Isaac Amin (Brody), for one morning, without having done anything wrong, he is arrested. Surrounded by the Kafkaesque anti-logic of post-Revolution Iran, Isaac is accused - apropos of nothing except, perhaps, his affluence and Jewishness - of spying for Israel. He is taken to a secret prison and subjected to agonising interrogations, while his distraught wife, Farnez (Hayek), is left to make sense of what has happened, to somehow secure Isaac's release, and to get their family away from this new climate of fear and repression.

"Director Wayne Blair (The Sapphires) brings a high level of suspense to his latest film, a gripping story of a family united by strife and an incisive examination of a troubled moment in history." (Toronto International Film Festival)

It's a movie whose good heart is outweighed by its heavy hand.

This lifeless, by-the-numbers production is an excruciating exercise in cliche and tedium.

Long on cardboard characterizations and short on genuine tension.

Heavy with earnest good intentions but too underpowered and oddly packaged to deliver the emotional gut punch its subject demands...