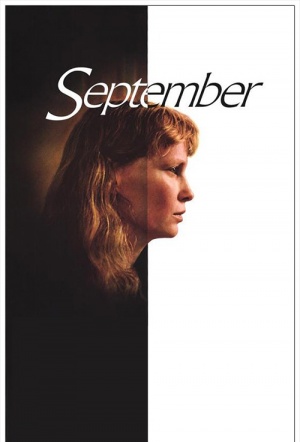 At a summer house in Vermont, neighbor Howard (Denholm Elliott) falls in love with Lane (Farrow), who's in a relationship with Peter (Waterston), who's falling for Stephanie (Wiest), who's married with children.

Allen's direction shows admirable economy both in establishing and sustaining mood, and in clearly delineating the claustrophobic parameters of his characters' emotional lives.

Every now and then there's a line or a confrontation that suggests the life that's still missing from the screenplay.

[Allen] is as acute an author of serious dialogue as anyone now making movies, and in "September" most of the real action goes on in the word choices.

...like "Interiors," "September" shows strain at the joints; it's not as vibrant as his [Allen's] last four movies. But there's something fine and brave about the attempt, and his touch for straight drama has gotten warmer and surer