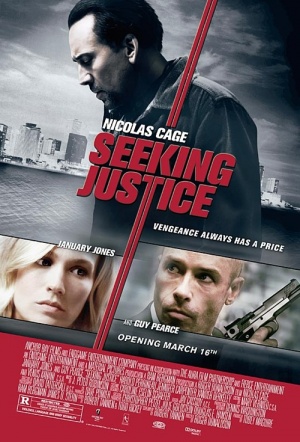 Nicolas Cage is an ordinary man forced to return a fatal favour for a vigilante group in this action thriller from director Roger Donaldson (The World’s Fastest Indian). Co-stars January Jones (X-men: First Class) and Guy Pearce (The Hurt Locker).

When an unknown man brutally assaults his wife (Jones), Will (Cage) is approached by the figurehead (Pearce) of a civilian-run organisation who initialise their own independent brand of justice. Will is offered a deal: the organisation will “settle the score” if he returns a similar favour in the future. In his moment of distress, Will accepts the offer. But when the time comes for him to serve his side of the bargain, he refuses, setting off a dangerous chain of consequences.