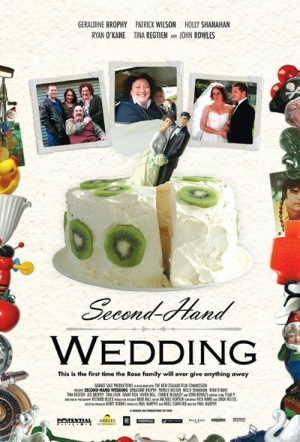 Kiwi comedy from first time director Paul Murphy, and first time writer Linda Niccol (based on an original story by Nick Ward, writer of Stickmen and The Ferryman).

Follows the fortunes of the Rose family, who live on the idyllic Kapiti Coast, where the sunsets are spectacular, parking is still free and bargains abound. Jill (Brophy) and Brian (Wilson) Rose are happily married and looking forward to their daughter, primary school teacher Cheryl (Shanahan, who played Jools on Outrageous Fortune), following in their footsteps when long-time boyfriend, mechanic Stew (O’Kane), proposes. Clouds gather, however, when it becomes clear that Cheryl has issues with her mother's voracious bargain hunting, which she fears will ruin her wedding. Covering up the truth has consequences for everyone involved. Also stars NZ’s Elvis, John ‘Cheryl Moana Marie’ Rowles as himself.

The most recent offering from our local film industry is a warm hearted romantic comedy set on the Kapiti coast. It centres on the impending marriage of Cheryl Rose to her sweet heart Stew. What should be the happiest day of Cheryl’s life is complicated by her mother Jill’s compulsion for hunting down bargains. She fears that this will turn her wedding into a tacky exercise in cutting costs which will in turn ruin the day every little girl dreams of. When word of this filters back to Jill, the previously idyllic family relations are threatened and the wedding has a whole raft of new issues to overcome.

It's not as sharp-witted nor dysfunctional as last year's Eagle Vs Shark set just down the road from this on Wellington's Kapiti Coast, neither is it quite the suburban heartland answer to Sione's Wedding.

But as a cosy mumsy nuptials flick it still hits the spot with its affectionately drawn main characters.

Second-Hand Wedding might have been made on the cheap but it's just a like a bought one. Oh and it's sure to get a warm reception.

Like your best mate: local, independent, good natured, generous, funny, and just plain likeable. Filmed on the Kapiti Coast earlier this year, the film was a labour of love for director Paul Murphy and his crew.