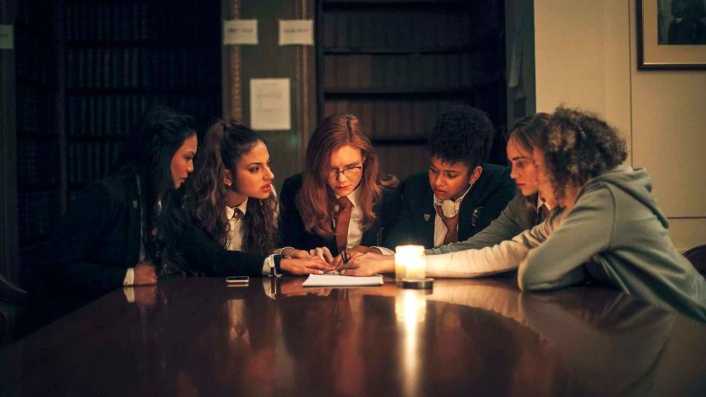 The feature directorial debut from the writer of You're Next and The Guest follows a group of upper-class teenage girls who conduct a seance... only to then suffer systematic deaths.

Camille is the new girl at the prestigious Fairfield Academy for Girls. Drawn into the mystery surrounding Kerrie, a student who died following a seance summoning the legendary Fairfield Ghost, Camille befriends Kerrie’s clique. When they invite her to their next seance, she initially believes that she is being pranked, but then the girls start being killed off one by one. The Fairfield Ghost has come to take its revenge and Camille must turn detective and solve the mystery, or suffer the same fate.

Visually, it can be a bit of a mixed bag... Still, the taut writing, Waterhouse, and bursts of lively violence give this high school-set slasher a passing grade.

The film’s sense of deja vu isn’t initially promising, but Barrett... banks on this sort of familiarity as a clever form of misdirection.

And while the scares are effectively staged, most of them are too short to really count as symphonies of tension and release.

A chilling horror movie that leaves its best ideas unexplored.

With leaden performances and puzzling camerawork, it's hard to feel in tune with the movie's frights outside of the occasional jump scare.

It's really silly, but I think that's it's saving grace.

You want to give them the benefit of the doubt that they were deliberately trying to make this look like a cheap Italian horror film.