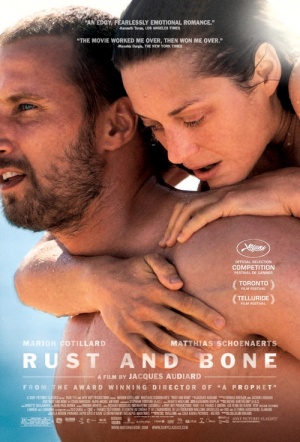 French drama from acclaimed filmmaker Jacques Audiard (A Prophet), winner of Best Film at the London Film Festival and nominated for the Palme d'Or at Cannes 2012. Follows the relationship between a sea park orca trainer (Marion Cotillard), injured when a performance goes seriously awry, and a troubled single father (Matthias Schoenaerts) with a talent for street fighting - and bedding women.

Homeless, penniless and friendless, Ali (Schoenaerts) finds himself left in charge of his young son. He takes refuge in Antibes, France, with his sister Anna. There he meets Stephanie (Cotillard) who trains orca whales at a marine park. When a performance ends in a tragedy that leaves her physically and mentally shattered, Ali becomes an unlikely friend and lover, even as he goes about his own self-absorbed life.

A tender yet heavily de-romanticized love story between a boxer with broken hands and an orca trainer with missing legs, Rust and Bone serves as an impressive if somewhat overblown exercise in contrasts.

About much more than just PC themes and outlandish plotting. Cotillard’s performance is primed for awards, while Schoenaerts is a rough diamond.

Lyrical touches and the most moving use ever of Katy Perry's "Firework" almost cancel out a cheap-shot third-act tragedy, yet it's the actors that save the film from soaping itself into Euro-miserablist irrelevance.

Rust and Bone is a strong, emotionally replete experience, and also a tour de force of directorial button pushing. Mr. Audiard is a canny showman, adept at manipulating the audience's feelings and expectations with quick edits and well-chosen songs.

What could have been simply bizarre, sentimental or contrived here becomes an utterly absorbing love story.

Writer-director Jacques Audiard (A Prophet) probes the psyches of two people in crisis. His hypnotic film means to shake you, and does. Schoenaerts reveals unexpected layers in Ali. And Cotillard delivers a tour de force of unleashed emotions. She's astonishing.

Romantic but pitiless, fearlessly emotional as well as edgy, "Rust and Bone" is a powerhouse.

Another triumph from Audiard and a Cotillard masterclass, this bruising, tender melodrama lingers long in the memory.

Both actors are tremendous - especially Schoenaerts.