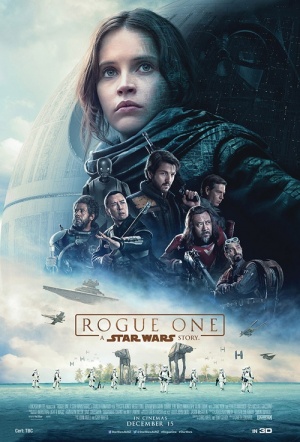 Disney and Lucasfilm's first standalone Star Wars film (that is, not part of the episodes 1 through 7 storyline). Takes place before the events of A New Hope, and tells the story of resistance fighters who have united to steal plans to the dreaded Death Star. Directed by Gareth Edwards (Godzilla, Monsters) and starring Felicity Jones, Mads Mikkelsen and Ben Mendelsohn.

Says producer Kathleen Kennedy: "Rogue One... will be a departure from the saga films but have elements that are familiar to the Star Wars universe. It goes into new territory, exploring the galactic struggle from a ground-war perspective while maintaining that essential Star Wars feel that fans have come to know."

For the original generation of "Star Wars" fans who weren't sure what to make of episodes one, two, and three, "Rogue One" is the prequel they've always wanted.

Rogue One might trade heavily in nostalgia but it's bold enough to take risks, and will leave you stirred, fired up and raring for more.

All the pieces are there ... like Lego figures in a box. The problem is that the filmmakers haven't really bothered to think of anything very interesting to do with them.

Its variations on a theme are muscular and adroit. This is another really entertaining fantasy with fan-fiction energy and attack.

Where Rogue One falls down is in the character development. There isn’t much...

A swiftly paced, rough-and-ready entertainment that, in anticipating the canonical events of "A New Hope," manages the tricky feat of seeming at once casually diverting and hugely consequential.

Loaded with more battle action than any of its seven predecessors, Rogue One: A Star Wars Story plays like a set-up for the events in the 1977 original and, for the most part, does so quite entertainingly.

This is a gorgeous and immersive film.

The ultimate Star Wars fan film, it's short on whimsy but when it gets going there's enough risk-taking and spectacle to bode well for future standalones.