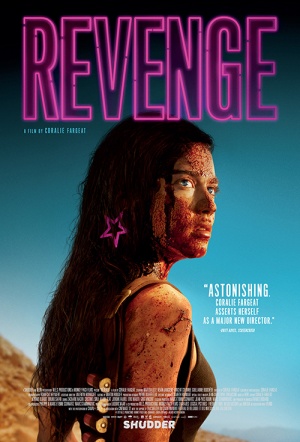 Matilda Lutz (Rings) goes on a blood-soaked rampage after being assaulted on her boyfriend's desert hunting trip in this rape/revenge thriller.

"Evoking Kubrick's Lolita, Jen (a lollipoppin' Matilda Lutz), arrives at a remote desert villa with her millionaire Adonis boy toy (Kevin Jannsens) for a weekend of romantic (and illicit) frivolity. Things go south quickly when her lover's unseemly hunting pals show up and make inappropriate advances that escalate into an outright assault. The men quickly try to sweep their attack under the rug, but Jen won't have it and, well… hell hath no fury..." (Toronto International Film Festival)

A well made film, which slithers confidently in its slick of blood.

Coralie Fargeat tears into the rape revenge genre with a startling ferocity in her debut feature, the brutal, bloody and beautiful "Revenge."

A slick production, but not the subversive classic we were hoping for.

With the near-unbearable scenes of self-surgery, sexual violence and several bathtubs' worth of blood, this is an uneasy and intense watch. See it if you can stand it.