Gets two stars for including the Las Plagas Parasite

Well technically i really should give it one star for not explaining what it was for anyone who has not played the game!!!
Now this movie should destroy anyones faith in a good resident evil horror movie, its pretty terrible movie in its own right let alone being part of the resident evil franchise. I was actually fairly optimistic for this movie as i was one of the few that actually enjoyed afterlife and thought it was a step in the right direction for the franchise. However the horrible trailer should have forwarned me that this movie would be crap. Terrible acting from pretty much everyone apart from mila and shawn roberts (who suspect knows the movie its not going to get any good reviews and just enjoys playing is role as wesker) plot holes galore, crappy writing and too much cheese that should not belong anywhere near anything resident evil related!!!!!!! 3D was generally pretty good like the last movie if you care about that stuff which is not many. The only redeeming features of this movie (and im stretching here) is the inclusion of the character Leon Kennedy (one of my fav characters from the game), the las plagas parasite (which was just cool i dont know why) and the sick dubstep song in the credits with Chino from deftones on the vocals (not movie related but oh well haha). Only see this movie if you want to see some incarnations of the biohazard enemies from the game everyone else should stay clear! 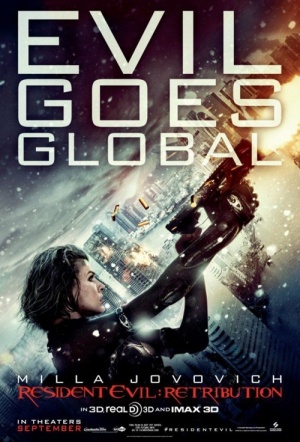