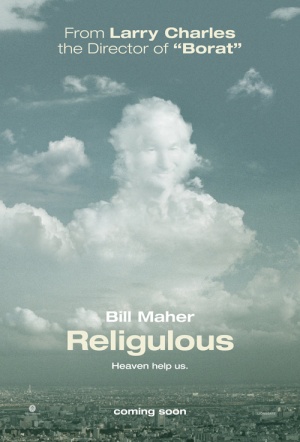 Larry Charles, director of Borat as well as highly notable episodes of Curb Your Enthusiasm and Seinfeld, turns his eye to the R-word. Religion. Your host: American comic Bill Maher.

A supermarket isle of organised religions such as Judaism, Christianity, Islam, Mormonism, TV evangelism and Scientology (apparently skipping Hinduism and Buddhism, strangely) are drawn into the crosshairs. Bill Maher's a disbeliever and sets out across the globe to see what's cooking for religion's followers.

To the film's credit, Maher never engages in Michael Moore-style gotcha tactics, but rather asks questions that raise more questions, in the form of a Socratic dialogue. To believers expecting a blind hatchet job, this will prove both thought-provoking and a bit disarming; skeptics may be surprised (as Maher is) by the occasionally smart replies to his queries.

Much of Mr. Maher's film is extremely funny in a similarly irreverent, offhanded way. Some true believers -- at least those who have a sense of humor about their faith -- may even be amused. But most will not.

You may very well hate it, but at least you've been informed. Perhaps you could enjoy the material about other religions, and tune out when yours is being discussed. That's only human nature.

Though he claims to be a seeker, someone who "has to find out" why believers believe, Maher sets out not after answers but cheap laughs that preach, so to speak, to the converted.

By focusing so narrowly on religious fundamentalists and bigots while ignoring any spiritual dimension to religion, the film is not only being disingenuous but limits its audience to non-believers.

It’s a rare film that can simultaneously crack you up and send a chill down your spine. Worth seeing — even for believers.

This film needed to be made. The only trouble is, while it's easy for avowed atheists and cynics like me to laugh along as Maher takes his pot shots at the side of the barn, we know that the people who might actually learn something from this film - like those poor bloody Bible-belt teens being dragged off to "creation museums" every weekend - are never even going to know that Religulous exists. Talk about preaching to the unconverted.