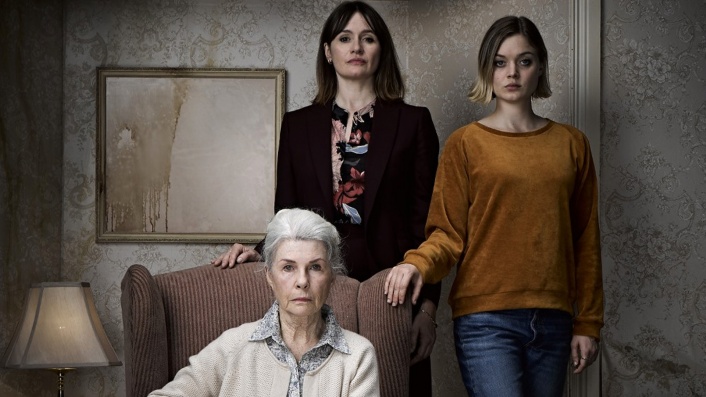 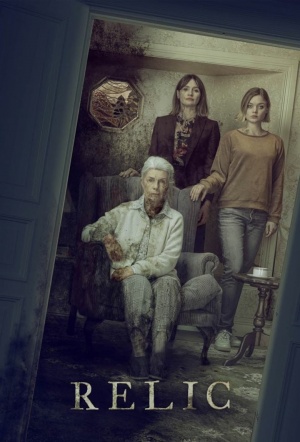 Emily Mortimer (Shutter Island) leads this haunted house horror as a woman searching for her dementia-ridden mother in their old country home. Co-stars Robyn Nevin (Top of the Lake) and Bella Heathcote (The Neon Demon).

When elderly mother Edna (Nevin) inexplicably vanishes, her daughter Kay (Mortimer) and granddaughter Sam (Heathcote) rush to their family’s decaying country home, finding clues of her increasing dementia scattered around the house in her absence. After Edna returns just as mysteriously as she disappeared, Kay’s concern that her mother seems unwilling or unable to say where she’s been clashes with Sam’s unabashed enthusiasm to have her grandma back. As Edna’s behavior turns increasingly volatile, both begin to sense that an insidious presence in the house might be taking control of her.

Rarely is the nature of death explored in as terrifying and tender a fashion...

For most of its running time, Relic feels more like a chamber piece than a full-fledged horror outing, but a nail-biting third act ups the ante.

A low-key but satisfying cut of sustained dread.

The richest, most satisfying brand of chiller there is.

The more grotesque its imagery, the more tender its twists.

Natalie Erika James’ debut doesn’t just tug at the heart, Relic wraps around it and steadily sinks its teeth into it.

The feel-dread movie of the year.

Deftly merges the familiar bumps and groans of the haunted-house movie with a potent allegory for the devastation of dementia.

A haunted house stands in for strained mother-daughter relationships in this psychological horror film from Japanese-Ausssie director Natalie Erika James, who joins with three top actresses to mess with your head long after you turn out the lights.

Relic takes its time, but exerts an ever-tightening hold on the imagination.

What begins as a more straightforward yet psychological approach to haunted house fare explodes into full-blown horror in a wholly unexpected way, and Relic marks one audacious debut.

Like Mike Flanagan before her, Natalie Erika James is a filmmaker who flawlessly blends terrifying horror with the ache of humanity.

My favorite horror movie of this year’s Sundance Film Festival is Natalie Erika James’ terrifying “Relic,” a slow burn genre pic that erupts in a climactic final act that had me fidgeting and squeezing my hands together with anxiety.

An Australian horror movie not to be missed.