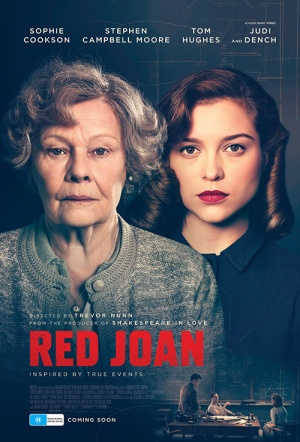 Based on a true story, Oscar winner Dame Judi Dench is a British physicist who led a double life as the longest-serving British spy for the KGB. Inspired by the life of Melita Norwood, Dench plays Joan Stanley, who looks back on a lifetime of espionage intrigue that spanned half a century - from the Second World War to the year 2000.

Oscar winner Dame Judi Dench is a British physicist who led a double life as the longest-serving British spy for the KGB. The film's inspired by the life of Melita Norwood, but as Sarah Voon explains, it simply cannot reflect the danger and intrigue of the real story.

A would-be sweeping epic that instead turns out tweedy, dreary, and unconvincing.

It's all about as tense as a gentle punt down the Cam.

Dench lends emotional heft and nuance to her handful of scenes, but Red Joan is otherwise let down by leaden dialogue and one-note characters.

Most of the fun in Red Joan comes from such overthrown expectations, so it's a shame that the film itself fails to overwhelm - mostly proceeding along dully familiar lines and anything but radical.

What betrays the film is a script that badly needed to be broken down and reassembled into a far leaner and nimbler form than the one presented here.

Solidly competent and, for the most part, well acted...

A taut old-school thriller with a modern heroine.

The film as a whole does have a fascinating story to tell and with this cast (especially Dench, of course) it is brought to the screen with considerable aplomb.