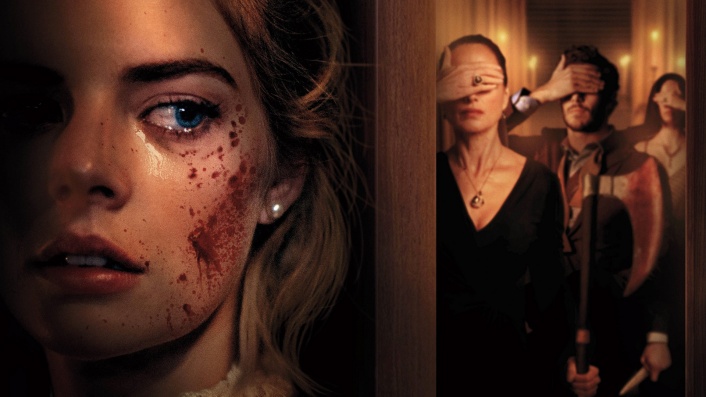 A good, if forgettable game, that's fun in the playing.

Directing duo Matt Bettinelli-Olpin and Tyler Gillett deliver on the poster's promise, as a bride goes on a defensive rampage not a million miles away from revisionist Final Girl revamps YOU’RE NEXT (2011) and THE CABIN IN THE WOODS (2012).

Samara Weaving plays the blushing bride, forced to play her new in-laws traditional game of chance on her wedding night.

The film might be less fun if she picked chess or checkers, but fortunately for horror fans, she picks Hide and Seek, not realising the "seek" bit involves being hunted down with an array of weapons, from crossbows and axes to shotguns and harpoons.

And that’s about it.

There’s a wickedly gleeful sense of humour at play and a few “the rich are different” metaphors thrown in to set the whole thing up as a commentary on society, and how the rich treat the lower classes like servants or sacrificial goats, but it’s all surface sheen.

Beneath that gorgeously shot manor house surface, tailored costumes and slick hair-dressing, this is a fun, fast-moving, kill-or-be-killed adventure - light on character, big on cliché and ultimately saved by its unerringly dark sense of humour.

Is it gory? Not really. It’s cartoon-style comic violence, not a million miles from early Peter Jackson splatstick, so there’s gushes of red, decapitations, and sudden deaths, but nothing really gruesome or realistic, and surprisingly few jump-scares.

With fun supporting cast roles for Mark O’Brien, Adam Brody, Henry Czerny and Andie MacDowell as members of the nutty Le Domas family, inheritors of a vast fortune built on board games, this is a film best viewed with a live audience of fellow cinemagoers intent on having a bad-taste ball.

Ultimately? A good, if forgettable game, that's fun in the playing.