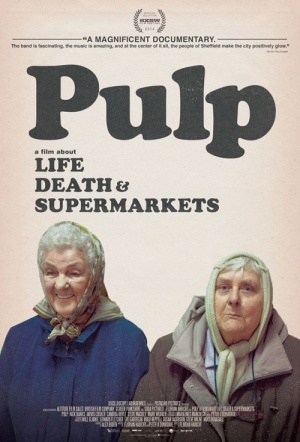 Having sold over 10 million albums over the course of their career, Pulp celebrated a different class of life to most of their Britpop contemporaries. Cocker's skills as a musical storyteller drew on experiences throughout his life, so when the band unexpectedly reunited in 2011, it was only fitting that they ended these shows with a performance in their hometown Sheffield, a city that Habicht turns his eye to as much as the band itself.

The best film that could be made about Pulp.

An artfully witty documentary... places South Yorkshire’s steel city at the heart of the story, cumulatively providing hints as to the band’s quietly awkward sensibility.

An earthy, affecting and droll celebration of the unique alignment of influences that forged a great band - and the thrusting live footage rams Pulp's greatness home.

Cocker's elbow-jiggling antics have always been silly and giddy but still, somehow, way beyond cool.

Florian Habicht's affectionate documentary tells the story of the band from the streets of Sheffield with the help of friends, family and fans, aged and youthful alike...all of whom have their own stories to tell.

The witty, loquacious Cocker is watchable as ever and the gig scenes will thrill Pulpers.