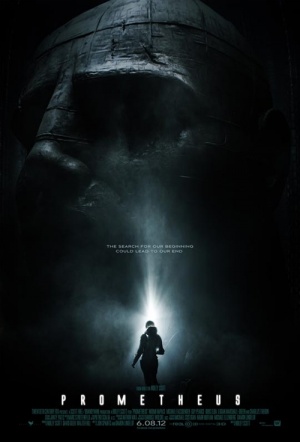 Director Ridley Scott's sci-fi thriller, set in the same universe as the Alien series. A discovery about the origin of life leads a team of explorers - including Noomi Rapace, Charlize Theron, Idris Elba and Michael Fassbender - to travel to a distant planet in the year 2093.

But the investigation into humanity's past and the discovery of an ancient civilization has brought them into contact with a powerful threat that could cause our extinction.

Not a direct prequel to Alien, Scott referred to the film as having evolved into its own "grand mythology and universe".

The film contains no shortage of freaky and exciting set-pieces, but it was the implications that really made this special for me. I wish more films had this level of ambition, along with the artistry to execute it. As far as I’m concerned, Ridley Scott is doing some of the best work of his career here.

Remains earthbound in narrative terms, forever hinting at the existence of a higher intelligence without evincing much of its own.

It might not pack the unbearable menace or blazing horror of the saga's first two movies, but it utterly eclipses the last two. It's exciting, tense and fully impregnated for sequels.

Ridley Scott has counter-evolved his 1979 classic Alien into something more grandiose, more elaborate – but less interesting.

Scott is to be praised for the sheer level of invention in Prometheus, even if he doesn't keep it all under control.

A magnificent film... It's in the classic tradition of golden age sci-fi, echoing Scott's "Alien", but creating a world of its own.

Where Prometheus falls short is that, with the exception of one sequence, the action comes across as silly and weak.

This really isn't an Alien movie; it's a lumbering, if visually impressive, space exploration epic which eventually turns into an Alien movie.

Although Ridley Scott's 3D visual feast is no classic, the oozing alien tentacles hit all the right sci-fi horror notes.

Prometheus is grand to look at, but it lacks the brutal simplicity and rigour of its forebears. It's too long winded to pass as a horror, and too daft to really be anything else.