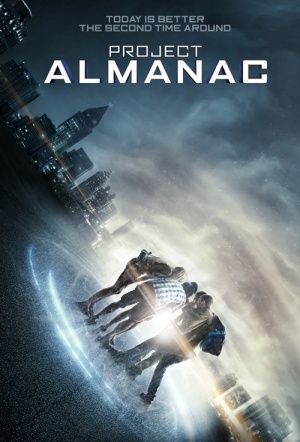 Found-footage sci-fi about a group of teens who happen upon David's (Jonny Weston, Chasing Mavericks) old video tape of his seventh birthday. But when the footage shows what looks like teenage David in the background, the mystery leads them to his late father's blueprints for a time-travelling machine – labelled ‘Project Almanac’.

Having failed to gain scholarship for MIT, David is more motivated than ever to construct what would be a scientific marvel. With the help of his sister and his two pals, they successfully build a functioning time-travel device, only to use it for high school pranks and attending music festivals in the past. But the constant manipulation of time results in disastrous ripple effects for the present, prompting David to untangle a delicate temporal web while avoiding paradoxes and singularities.

“Why are you filming this?” and “How has that shirt not been washed?” are two of many questions you’re likely to ask in this plot-hole-digging, found-footage sci-fi about tech-savvy teens who discover plans to build a time machine. When the ‘hot chick’ stumbles onto what they’ve been doing, she reckons they should skip the testing precautions and use the device on themselves. Thanks to raging hormones and adolescent dumb-assery, they oblige.

A time-travel premise goes nowhere fast in this latest take on the increasingly tired found-footage genre.

It’s far more excited about the shallow possibilities of cheating the fourth dimension than the infinitely scarier ones of messing it all up.

Despite the uncomfortable sexism and altogether predictable nature of the film, I'd be lying if I said it wasn't modestly entertaining.

If it didn't bungle it all with a shrug of an ending, it would be easier to recommend.

With "Looper" and the fantastic recent release "Predestination" using the same plot device to explore existentialism, the potboiler Project Almanac feels like a leap backward.

Along the way Almanac is forced to cheat so much with its ostensibly self-shot material that one has to ask why the format was chosen.