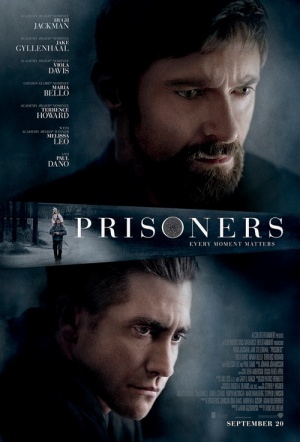 Hugh Jackman, Jake Gyllenhaal and Maria Bello lead this missing-persons crime thriller from the director of Arrival and Blade Runner 2049. Keller (Jackman) is facing every parent's worst nightmare: his six-year-old daughter, Anna, is gone without a trace. Detective Loki (Gyllenhaal) arrests the only suspect (Paul Dano), but a lack of evidence forces his release. Knowing his child's life is at stake, Keller decides he has no choice but to take matters into his own hands. How far would you go to protect your child?

Prisoners is a pulpy crime thriller elevated to event film status by top-notch filmmakers. It outstays its welcome by a good half hour but still proves compelling, thanks in part to subject matter that practically demands emotional investment from an audience: children in peril.

A spellbinding, sensationally effective thriller with a complex moral center.

A simmering pressure cooker of a thriller, Prisoners is an unforgiving but emotionally rewarding experience sustained by powerhouse performances, taut scripting and Villeneuve’s tonally assured direction.

The uniformly showy performances (Acting with a capital ‘A’) are what do in Prisoners more than anything.

In his first English language film, Quebeçois director Denis Villeneuve has produced a masterful thriller that is also an engrossing study of a smalltown America battered by recession, fear and the unrelenting elements.

Gyllenhaal's wildly overqualified small-town police detective is by turns righteously angry and sardonically funny... the kind of unflashy performance that rarely wins awards, even though it actually anchors this film.

Prisoners can at times be a hard film to watch, but thanks to all the talent involved, it’s even harder to shake off.

A decent, cogent, greyly atmospheric thriller with something to say about War-On-Terror America.