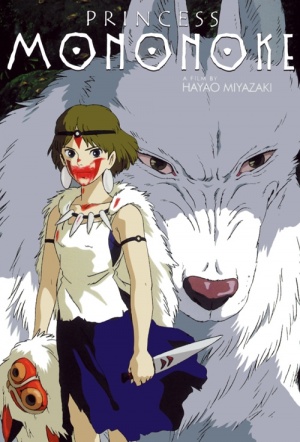 Epic Hayao Miyazaki/Studio Ghibli eco-themed fantasy anime, 16 years in the making, about the struggle between supernatural guardians of a forest and the humans who consume its resources. Princess Mononoke was the first Studio Ghibli film to be a major hit and receive worldwide attention. The English-speaking voice cast includes Billy Crudup, Claire Danes, Billy Bob Thornton, Minnie Driver and more.

Set in an Emishi village during Japan's Muromachi Period in the 14th century, the young Ashitaka is fatally cursed after defending his village from a demonic wild boar. He travels west to find a cure from the deer-like god Shishigami. Along the way, he comes across a battle raging between the animal inhabitants of a forest and an iron mining town that is exploiting it. The village has provoked the rage of the Wolf God, Moro, who attacks the village with an army of animals led by Princess Mononoke.

The story has simplicity and force, with captivating images and gutsy narrative ideas recalling Kipling, Ovid and Homer.

I go to the movies for many reasons. Here is one of them.

There is no denying the film's visual imagination, from the awe-inspiring creature creations to the stunning forest landscapes to the sensitive human characterizations.

A windswept pinnacle of its art, Princess Mononoke has the effect of making the average Disney film look like just another toy story.

This imaginative and intriguing Anime deserves all the plaudits heaped upon it.