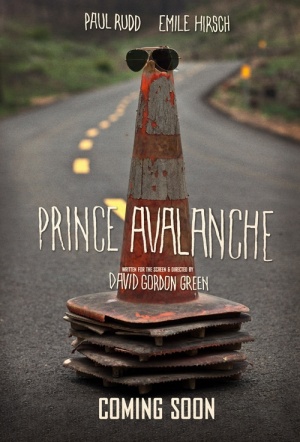 Paul Rudd and Emile Hirsch are an odd couple forced to bond over a summer job repainting traffic lines down a stretch of Texan highway in this buddy film, winner of Best Director for David Gordon Green (Pineapple Express) at the Berlin Film Festival. Adapted from the 2011 Icelandic film Either Way, and featuring a soundtrack by Explosions in the Sky.

"Meditative and stern Alvin (Rudd) and his girlfriend’s brother, Lance (Hirsch), dopey and insecure, leave the city behind to spend the summer in solitude repainting traffic lines down the centre of a country highway ravaged by wildfire. As they sink into their job in the remarkable landscape, they learn more than they want to about each other and their own limitations. An unlikely friendship develops through humour and nasty exchanges, leading to surprising affection." (Sundance Festival)

Green fashions a slow-burn charmer that’s a million miles from Pineapple Express in tone, pace and content. But just like that film, the odd couple interplay is beautifully judged.

One of the most intriguing and thoughtful American films of the year.

A wise and witty slow-motion road trip that catches the sun.