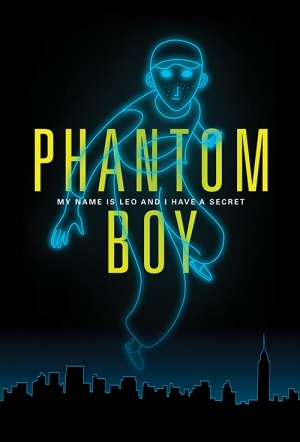 From the Oscar-nominated directors of A Cat in Paris comes this animated supernatural crime-fighting adventure set in New York.

"11-year-old Leo (Marcus D'Angelo) is ill and can't leave the hospital – but he can leave his body and fly around New York. One night, on one of his excursions, Leo comes across a mobster plotting a crime. The dastardly criminal is called The Man With the Broken Face: he wears a mask resembling a Picasso painting and is followed around by Rufus, his sidekick pup. To use his supernatural powers and become a super hero, Leo must team up with wheelchair-bound detective Alex (Jared Padalecki) and fearless journalist Mary (Melissa Disney) to fight the super criminal threatening the city. With distinctive and vibrant animation, Leo’s is a mission of empowerment as he fights the good fight, as well as his own tougher health battles." (Sydney Film Festival)

Phantom Boy may fall at the other end of the spectrum from super-polished DreamWorks and Pixar product, but the directors' impressionistic touch won't seem so alien to fans of Cartoon Network and Nicktoons series.

Noirish touches flesh out the wispy plot, yet it's the old-school animation that engages most: lending clarity to the emotions at stake, ensuring our sickly hero's resilience tugs on the heart.

Frequently beautiful to look at, but the cops-and-robbers angle feels tired.

There's an appealing quaintness to the storytelling that calls to mind the Tintin books of the artist and writer Hergé, especially that series's old-world charm.

Instead of maintaining an effervescent fizzle, "Phantom Boy" too frequently sputters piffle.

It's an entertaining romp, which for me had weird, engaging echoes with Richard Linklater's Waking Life.

A modest, engaging film that reminds viewers of the intimate pleasures of drawn animation in an era of CG blockbusters.