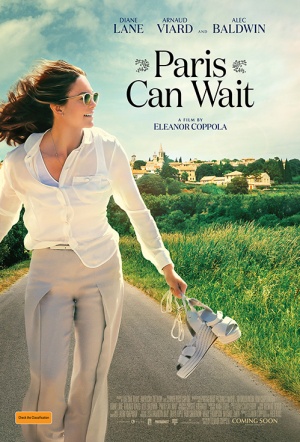 Diane Lane and Arnaud Viard head up this breezy road rom-com set in France and directed by the 80-year-old matriarch of the Coppola family, Eleanor Coppola.

"In her early fifties, Anne (Lane) has arrived at a turning point. Her daughter has left home to attend university, and her nest now feels doubly empty because her workaholic husband (Alec Baldwin), a successful film producer, is chronically absent. When he is called away on location, Anne is offered transport from Cannes to Paris with her husband's friend and business associate (Viard), a seductive bon vivant who unabashedly sets sights on his comely passenger. The trip could be done in a matter of hours, but it stretches into a leisurely two-day journey brimming with diversions such as beautiful churches, fine food, delectable wine — and expert wooing. While the rakish connoisseur regards the many young women he might easily bed as mere soufflé, Anne, he declares, is crème brûlée. But will Anne ultimately surrender to his charms?" (Toronto International Film Festival)

Eleanor Coppola (the 80-year-old mother of Sofia and wife of Francis), is best known for her cracking documentary Hearts of Darkness, charting the behind the scenes madness of Apocalypse Now. Whilst that doc rocked, this rom-com road-trip is a pretty tiresome trek, unless you’re with the French tourist board, in which case you’ll love this advert for holidaying in the land of wine and cheese.

Eleanor Coppola takes audiences on a road trip through France, though the company makes the journey all but insufferable.

"Paris Can Wait" is a modest, genteel piece of cinematic escapism, a silky testament to sensuality as impeccably tasteful as it is utterly undemanding.

Little more than an indulgent wallow in gustatory privilege. By the time the final meal is devoured, you'll be wanting nothing so much as an antacid.

There are touching moments – whether that be the loss of a child, or the disappearance of a Rolex watch – that could only have come from real life, and the film is all the better for them.

Director Eleanor Coppola is 80, but you'd never know it from her seductive lightness of touch. Diane Lane is irresistible in this delightful love-triangle that costars the French countryside, looking so delicious you want to lick the screen.

Coppola deftly shifts the focus to the woman behind the great man and asks who she is, how she understands the world, what she cares about. It's fully her story and a rare perspective

Eleanor Coppola serves up a sweet little divertissement with Paris Can Wait, a slight but charming travelogue/food-a-thon about two middle-aged acquaintances on a two-day road trip from Cannes to Paris.

Startling in its pointlessness.