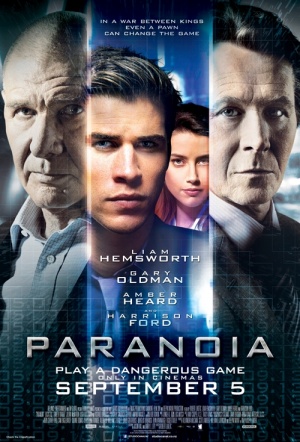 Business espionage thriller starring Harrison Ford, Gary Oldman and Liam Hemsworth. Hemsworth plays an entry-level employee, determined to earn his place at the powerful corporation he works for. However, there’s a dangerous catch: he must help secure a multi-billion dollar advantage against a rival company by going undercover.

Adam's ruthless CEO, Nicholas (Oldman), has him spy on Jock (Ford), Nicholas' former mentor. Through doing so, Adam soon occupys the corner office and is living the life of his dreams. But behind the scenes, he is simply a pawn in Nicholas' corporate game and begins to realise that he must find a way out from under his boss who will stop at nothing, even murder, to win a multi-billion dollar advantage.

Occupying the same space as other laughable, misguided Hollywood attempts at “timely”, “technologically relevant” cyber-thrillers like The Net and Firewall, Robert Luketic’s Paranoia answers the question nobody was asking: what if the director of Legally Blonde remade The Conversation? Just as generic and bland as its title would imply, this unexciting corporate espionage thriller plods along with exposition-clogged, techno-babble dialogue and standard issue cloak-and-dagger reversals while taking the odd swipe at online privacy to warn us that yes, Big Brother has never stopped watching.

Has a host of problems, but the biggest seems to be that no one in it is nearly paranoid enough.

The fact that Hemsworth is severely lacking in leading-man charisma also doesn’t help the pervasive overall incompetence of the film, which fixates on the perils and panic of our modern surveillance culture while itself proving to be borderline unwatchable.

Mr. Oldman and Mr. Ford are the only actors in the film, directed by Robert Luketic (“Legally Blonde”), skillful enough to navigate the yards of jargon-packed boilerplate in Jason Hall and Barry L. Levy’s thudding screenplay.

Ford and Oldman’s scenes together are Paranoia’s sole redeeming facet.

The filmmakers may have hoped to make a timely commentary on the amorality in our executive suites, but they end up merely restating the obvious. Maybe the whole thing would have played better as a corporate comedy, the kind that Doris Day and Rock Hudson made some 50 years ago.