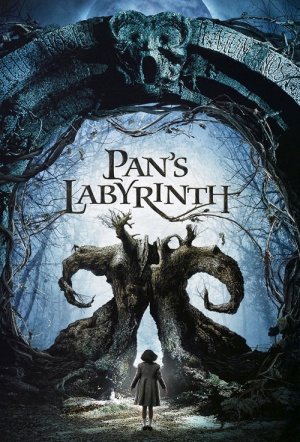 Director del Toro will warn you himself: “I hope no one takes their children to this movie. I hope no one mistakes it for Harry Potter”. Pan’s Labyrinth is a brutal fantasy-horror set in fascist Spain, that most rare of genres. Ofelia (Baquero), a 12 year old girl, lives with her pregnant Ma and tyrannical stepfather (Lopez). To escape her harsh realities, Ofelia retreats into her own imagination.

The film cuts to and fro from her 1944 life in Spain, and the no-less kind mythical Labyrinth where a disgustingly ugly faun by the name of Pan (played by mime Doug Jones, from del Toro’s Hellboy) sets her a series of challenges. If she achieves them, she’ll take the crown as princess of this underworld kingdom and simultanesouly save her family.

A swift and accessible entertainment, blunt in its power and exquisite in its effects...

The performers are all good with Baquero poised and beautiful as Ofelia and Verdu vital and spirited as the rebellious Mercedes. Lopez gives an extraordinary performance as the bestial captain, an irredeemable villain to rank with Ralph Fiennes' Nazi in "Schindler's List"...

Visually stunning, it meshes haunting images with a complex multilevel story about the enchantment of youth...

This intense film, a mix of horror, fantasy, and history that convinces on all those levels and mixes them up with dizzying brio, is a searing cinematic experience, a beautiful, terrifying vision from writer-director Guillermo del Toro...

an affecting fable, made more so especially by the luminous performance of young Baquero and the truly frightening two worlds she finds herself in...

Del Toro's trademark visual flair gets its finest ever chance to shine, rendering the tale onscreen so perfectly that the subtitles are barely needed. Every actor - most notably, Ivana Baquero's wide-eyed Ofelia and Sergi López's vicious, glittering Captain – excels. Compelling from first frame to last, Pan's Labyrinth never misses a chance to wrench, quell or quicken your heart: this visionary project propels Del Toro into the highest league of filmmakers. There can be no excuses. See this film...