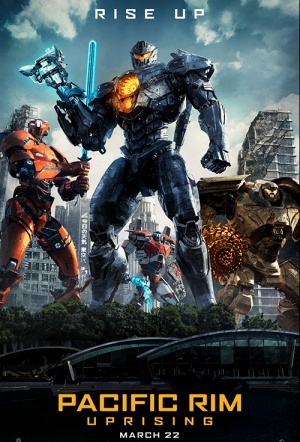 It has been ten years since The Battle of the Breach and the oceans are still, but restless. Vindicated by the victory at the Breach, the Jaeger program has evolved into the most powerful global defense force in human history. The PPDC now calls upon the best and brightest to rise up and become the next generation of heroes when the Kaiju threat returns.

Guillermo del Toro’s 2013 Pacific Rim featured heroes inside giant robot ‘Jaegers’ thumping enormous ‘Kaiju’ monsters. It was a visual feast that suffered from the same lack of decent script and characters that plagues the technically stunning, but story-stilted, Transformers franchise.

Paint-by-numbers approach to franchise construction, replete with a formulaic promise of future installments that, on the basis of this entry, feels mostly like wishful thinking.

Respectable. Boyega adds real bounce and DeKnight delivers spectacle, even if the plot doesn't strain too far from the original's crash-bang formula.

The film in general moves at a sleeker pace, with more of an actual plot to match the shiny visuals. It's strange given that Del Toro, a newly minted Oscar-winning director, couldn't make a more entertaining film than Uprising's Steven S DeKnight,

Face-offs in Siberia and finally on the slopes of Mt. Fuji provide some welcome relief from the sameness of modern cities, the snow and ice adding an appealing new degree of difficulty to the same old fight.

The sequel is an improvement on its predecessor in at least one respect: Its running time is twenty minutes shorter. Not that you feel it.

If you enjoyed 2013's Pacific Rim but secretly wished it was more like a vapid Transformers sequel, then you'll love Pacific Rim Uprising.