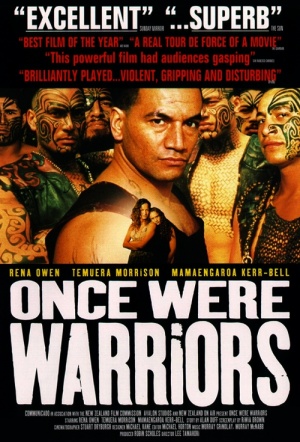 The hard-hitting New Zealand classic about a violent and troubled family in South Auckland, based on Alan Duff's novel. Directed by Lee Tamahori and featuring a towering performance from Temuera Morrison as Jake the Muss.

Jake and Beth (Rena Owen) Heke have been married for 18 years and have five kids. While the love is there, Jake is a terrifying man who frequently fights at the pub and in the home. The film follows several weeks in the Otara family's life, showing Jake's alcoholism and its destructive effect, as well as the indomitable spirit of Beth.

Once Were Warriors became the highest ever grossing NZ movie at the domestic box office, until it was overtaken by Roger Donaldson's The World's Fastest Indian in 2005.

Once Were Warriors / Reviews

The barren lives of members of an urban Maori family are rigorously exposed in this rugged and painful picture... one of the best to emerge from New Zealand in quite a while.

In his visceral first feature, Tamahori offers social realism with a savage kick, depicting Maori New Zealanders whose ties to their own history have been destroyed.

Powerful and chilling... directed by Lee Tamahori with such narrative momentum that we are swept along in the enveloping tragedy of the family's life.

As often happens when films are intent on getting a message across, Once Were Warriors can't stop itself from overdoing things.

Once Were Warriors / Trailers