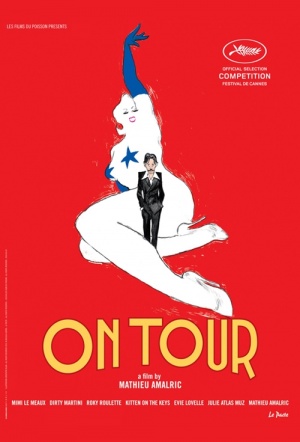 "Behind the glamorous world of burlesque is the reality of what happens On Tour. In this lively road movie we catch a glimpse of that backstage world, behind the fan dances and the feathers.

"Director/star Mathieu Amalric (memorable from The Diving Bell and The Butterfly) plays Joachim, a former Parisian television producer set on making a triumphant return to France as the tour manager for a troupe of burlesque performers. Soon however their plans fall apart, old wounds are opened and life in bland hotels isn't what the romantic young hopefuls had imagined. Can Joachim stay afloat as his shameless dancers run riot and his own past threatens to ruin everything?" (French Film Festival 2011)