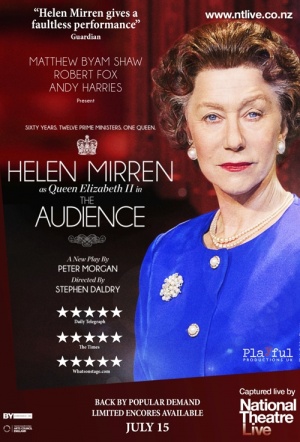 From the National Theatre's third season of live recordings direct from the London stage, a new play by Peter Morgan starring Helen Mirren - reprising her role as Queen Elizabeth II.

"For sixty years Elizabeth II has met each of her twelve Prime Ministers in a weekly audience at Buckingham Palace. Both parties have an unspoken agreement never to repeat what is said. Not even to their spouses. The Audience breaks this contract of silence and imagines a series of pivotal meetings between the Downing Street incumbents and their Queen. From Churchill to Cameron, each Prime Minister has used these private conversations as a sounding board and a confessional." (National Theatre)