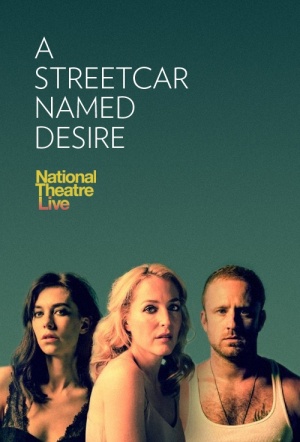 From the National Theatre's 2014 season of live recordings direct from the London stage, this is the Young Vic's production of Tennessee Williams' masterpiece starring Gillian Anderson and Ben Foster.

"The fastest-selling production in the Young Vic's history... With Anderson (The X-Files) as Blanche DuBois, Foster (Kill Your Darlings) as Stanley and Vanessa Kirby (BBC’s Great Expectations) as Stella. As Blanche's fragile world crumbles, she turns to her sister Stella for solace – but her downward spiral brings her face to face with the brutal, unforgiving Stanley Kowalski. Visionary director Benedict Andrews returns to the Young Vic following his Critics' Circle Award-winning Three Sisters." (National Theatre)