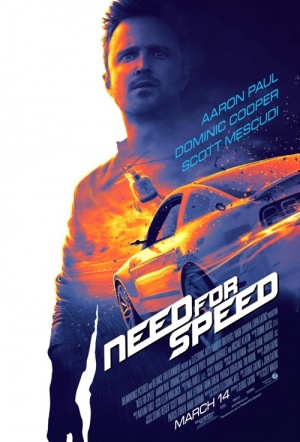 In a last attempt to save his struggling garage, blue-collar mechanic Tobey Marshall (Paul) reluctantly partners with wealthy ex-NASCAR driver Dino (Cooper). Just as a major sale to car broker Julia (Poots) looks like it will save the business, an unsanctioned race results in Dino framing Tobey for manslaughter. Two years later and fresh out of prison, Tobey is set on revenge with plans to take down Dino in the high-stakes De Leon race - the Super Bowl of underground racing. To get there in time, Tobey must run a high-octane, action-packed gauntlet, dodging cops coast-to-coast as well as hunters looking to claim the bounty Dino put on his car.

The script comes from Oscar-nominated writer John Gatins (Flight, Real Steel) and his brother George, though not based on any story or characters from a Need for Speed game.

Would-be Fast and Furious franchise competitor Need for Speed does not do itself any favours by inviting comparisons to old school car movies like Bullitt - which the characters actually watch in one scene - it only serves to highlight the pretentiousness of the new film.

The cars are hot, the action is decent, but the characters and plot need a serious tune-up.

Audiences purely interested in the cars won't be disappointed - frankly they're sexier than the cast.

An energetic, unpretentious B movie... it is devoted, above all, to the delivery of visceral, kinetic excitement.

Powered by impressive practical stuntwork, eye-popping cross-country landscapes, and the sparking chemistry between Paul and Poots.

You wouldn't think a movie called Need For Speed would feel so slow.