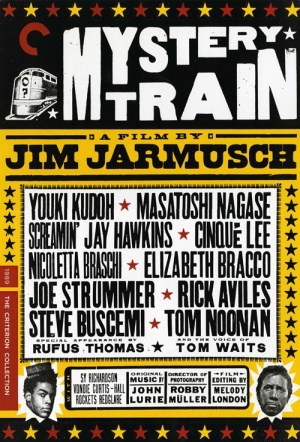 Written and directed by film maverick Jim Jarmusch, the Palme d'Or-nominated Mystery Train is comprised of three short anecdotes involving foreign tourists in Tennessee. Each story is set in a fleabag Memphis hotel which has been redressed as a "tribute" to Elvis Presley.

Story one "Far From Yokohama" involves two Japanese tourists whose devotion to '50s American rock music blinds them to everything around them. Story two "A Ghost" finds eternal victim Luisa (Nicoletta Braschi) sharing a room with stone-broke Dee Dee (Elizabeth Bracco) and having her problems solved by a spectral vision of the King. And story three "Lost In Space" offers the further misadventures of Dee Dee, her no-good boyfriend, and her dysfunctional family.

Happily, Jarmusch's formal inventiveness is framed by a rare flair for zany entertainment.

Takes you to an America you feel you ought to be able to find for yourself, if you only knew where to look.