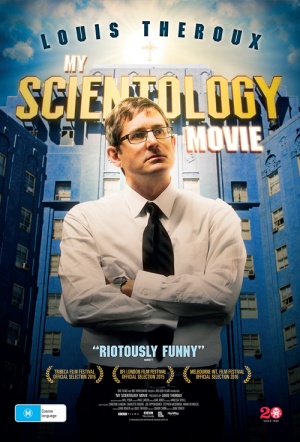 Reporter of weird things, Louis Theroux, heads to Los Angeles to try and understand the psychology of Scientology. As he states: "I find that the most shocking behaviour is motivated by very relatable human impulses." Employing actors out of necessity, as well as his familiar one-on-one interviewing style, Theroux zeroes in on the personal side of Scientology's outrageous aspects.

"Following a long fascination with the religion and with much experience in dealing with eccentric, unpalatable and unexpected human behaviour, the beguilingly unassuming Theroux won’t take no for an answer when his request to enter the Church’s headquarters is turned down.

"Inspired by the Church’s use of filming techniques, and aided by ex-members of the organisation, Theroux uses actors to replay some incidents people experienced as members to better understand the way it operates. In a bizarre twist, it becomes clear that the Church is also making a film about Louis Theroux. Suffused with a good dose of humour and moments worthy of a Hollywood script, My Scientology Movie is stranger than fiction." (London Film Festival)

The 21st Century has seen brave, shocking disclosures about Scientology: both the written and documentary versions of Going Clear: Scientology and the Prison of Belief, John Sweeney’s investigation for BBC current affairs show Panorama, and, er, the South Park episode Trapped in the Closet. With the tax-exempt nonprofit organisation’s secrets increasingly out in the open and subjected to ridicule, and an abundance of harrowing personal accounts from senior ex-members having aired, one wouldn’t think there’s huge scope for further examination of the subject unless new facts are unearthed, or a new angle taken.

Theroux's first big-screen doc is an entertaining affair, peppered with surreal moments and wry wit, but its elusive subject remains out of reach.

Louis Theroux investigates the Church's controversial history through a mixture of interviews, recreations and likeable bumbling.

Fully half the film consists of cameras pointing at other cameras, like an absurdist gunfight at dawn, with neither side willing to holster.

Much of this material has been canvassed elsewhere - notably in Alex Gibney's recent documentary Going Clear - and major revelations are few.

The recreations are genuinely harrowing, so it's hard to come away thinking that "Freedom of Religion" ought to apply to this particular one. But you be the judge.

For a more comprehensive and sober exposé, see Alex Gibney's Going Clear: Scientology and the Prison of Belief, but Theroux's film works well as an entertaining and thought-provoking companion piece.

It can sometimes be amusing viewing, but like Theroux's finest TV work, it is always both revealing and disturbing in equal measure.