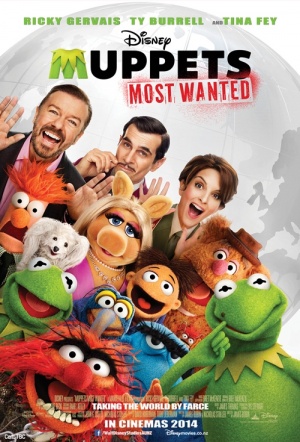 Follow-up to the Muppets' triumphant 2011 return to the big screen, with Ricky Gervais, Tina Fey, Ty Burrell and Jemaine Clement amongst the celebrity cast. While on a grand world tour, the Muppets find themselves wrapped up in a European jewel-heist caper headed by a Kermit lookalike and his dastardly sidekick. Director James Bobin returns, as does songwriter and music supervisor Bret McKenzie - Oscar-winner for The Muppets.

As the events of the previous Muppets film conclude, the gang find themselves pondering their next move until they’re presented with a tempting offer by tour manager Dominic Badguy (Gervais). Setting off on a world tour organised by Badguy, the Muppets travel to perform shows in Europe – where Kermit’s place is taken by a lookalike, the dangerous master criminal Constantine. Working alongside his accomplice Badguy, Constantine carries out a string of robberies throughout the tour which gain the attention of Interpol’s Jean Pierre Napoleon (Burrell) and CIA agent Sam Eagle. Meanwhile Kermit, set up as the real Constantine in the pair’s switcheroo, struggles to escape a Siberian gulag under the command of Nadya (Fey) so he can rejoin his pals and bring Constantine to justice.

Reuniting many of the key personnel from 2011’s The Muppets – frog, director, pig, songwriter, uncategorisable creatures – pretty much the only ones sadly absent here are leads Jason Segel and Amy Adams. Luckily, this new film proves their work in successfully reviving the franchise has been done, and it can now move forward into less self-referential territory with some fresh faces.

The creative spark and sense of purpose are gone in this hokey transcontinental caper.

Smartly spoofy rather than sweetly nostalgic, this distractingly star-studded jaunt is fast and funny, but short on emotional punch.

Misses the genial charm of The Muppets stars Amy Adams and Jason Segel (the latter is also notably absent from the writing credits).

An eventful entry in the Muppet film library but not a classic one.

As that opening number warns from the start - The Muppets remain pleasant company, even starring in a movie that's this content to warm up what's worked before.

Nearly as good as the last film - the starrier cameos compensating somewhat for the more scattershot plot - this is fun but could have been more deeply felt.