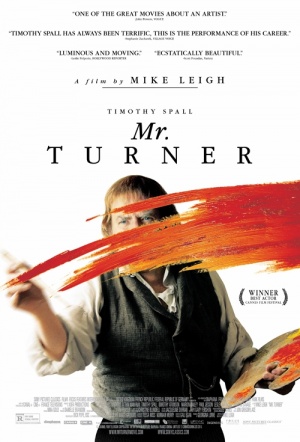 "Profoundly affected by the death of his father, loved by a housekeeper he takes for granted and occasionally exploits sexually, Turner forms a close relationship with a seaside landlady with whom he eventually lives incognito in Chelsea, where he dies. Throughout this, he travels, paints, stays with the country aristocracy, visits brothels, is a popular if anarchic member of the Royal Academy of Arts, has himself strapped to the mast of a ship so that he can paint a snowstorm, and is both celebrated and reviled by the public and by royalty." (Cannes Film Festival)

Beginning with Turner in middle age, Mike Leigh presents a series of vignettes that build, like paint on canvas, to create a complex portrait of renowned English artist and “painter of light”, J.M. Turner. The lack of backstory, and fractured narrative, will leave those without prior knowledge all at sea, anchored only by Timothy Spall’s warts n’ all portrayal of a man who says of himself: “When I peruse myself in a looking glass, I see a gargoyle.”

Rarely has watching paint dry been so fascinating.

Offers a wonderfully rich tapestry of experience and digs deeply into a complicated, contradictory life.

Beyond the troughful of fun tics, Spall makes Turner tenderly and totally human — the effect of which is to make his artistic talents seem even more extraordinary still.

What a glorious film this is, richly and immediately enjoyable, hitting its satisfying stride straight away. A feat of confidence, with an outstanding performance from Spall.

Manages to illuminate that nexus between biography and art with elegant understatement.

Shimmering with awards potential, Leigh’s glorious picture is a hilarious, confounding, wholehearted and dazzlingly performed portrait of an artist as an ageing man.