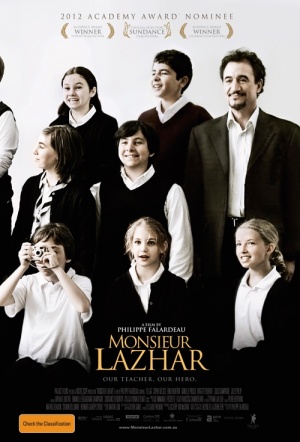 Bachir is an Algerian immigrant, trying to find a decent teaching job in Montreal when a perfect opportunity arises - but under tragic circumstances. With a classroom full of children going through a confusing time, Bachir tries to help them using the power of self-expression and his own personal loss to guide them.

The result is a shrewd look at classroom etiquette and an achingly sad study of grief-stricken solitude, built on ace performances by Fellag and the kids-especially 11-year-old scene stealer Sophie Nélisse.

Only the most obstreperous delinquent could fail to be charmed by Monsieur Lazhar, in which an Algerian refugee plays ramshackle Mary Poppins to the kids at a Montreal primary.

Though its story may sound formulaic on paper, please take my word for it: 'Monsieur Lazhar', written and directed by Philippe Falardeau, is a sharply intelligent, deeply sad, and not remotely sappy film about both teaching and collective grief.

One of the qualities of 'Monsieur Lazhar' is that it has no simple questions and simple answers. Its purpose is to present us with a situation, explore the people involved and show us a man who is dealing with his own deep hurts.

This film deals almost casually with a range of issues and themes, handling with a light and even affectionate touch weighty subjects like grief, guilt, community and love.

Canada's foreign-language submission is a searing classroom drama about grief that should be an Oscar front-runner.

An Oscar nominee at this year's Academy Awards and for good reason, Falardeau's film is moving, smart and sensitive. Terrific stuff, in short.